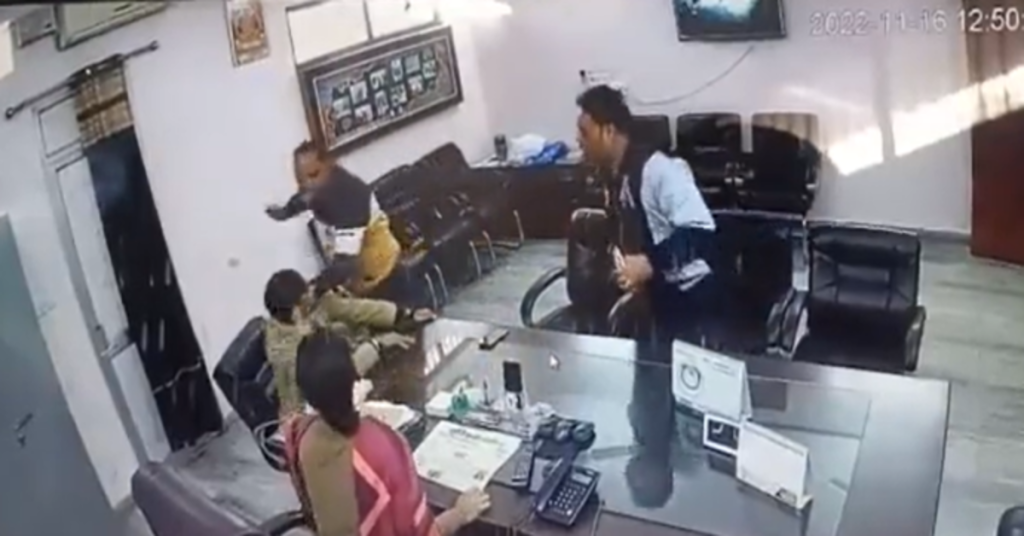 A video has come to the fore from Punjab’s Ludhiana where a fight broke out between parents and a school clerk while discussing outstanding school fees. According to reports, the fight transpired when the school authorities were talking to the parents about pending school fees which amounted to 2.2 lakhs.

The incident of the fight was caught on a CCTV camera installed inside the premises of the school.

In the video, the parents and the school authorities can be seen sitting and talking about the outstanding school fee. The parents can be seen talking to the school clerk in a normal manner after which, the scenarios changed as the parent ended up slapping the clerk after he said something.

One parent can be seen unleashing an attack on the school clerk as they repeatedly slapped the clerk while grabbing him by his collar. Another school official can also be seen trying to stop the parents from assaulting the school clerk, however, the parent stuck to his ways and continued the assault. The parent could also be seen trying to threaten the man and being in an angry state.

Another incident of a similar nature came to light from Uttar Pradesh’s Rae Bareli where a fight was triggered between two female teachers. In the video, one teacher can be seen stepping up to the other teacher after one threatened another. As a response to stepping up, the second teacher shoved the woman back after which the fight ended up in fisticuffs.

One of the teacher after being slapped can also be seen crying as a result of the fight. The Raebareli Police also took cognizance of the matter and filled a case in the matter according to reports.